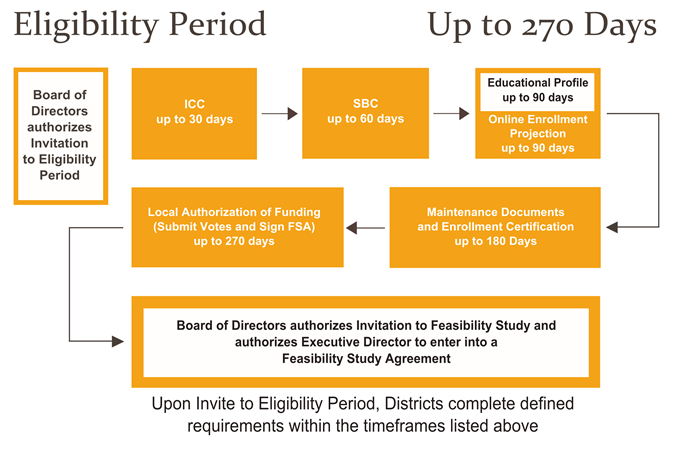 To further maximize resources, the MSBA has formalized and streamlined the beginning of its grant process with the establishment of an Eligibility Period, which has and will continue to result in several benefits to the District and the MSBA. The Eligibility Period assists the MSBA with managing its financial resources by identifying early in the process whether a District is ready to manage and fund a capital project. It will help to determine a District’s financial and community readiness to enter the capital pipeline. It will also assist Districts locally by providing a definitive schedule and identifying needs for planning and budgeting.

A vote of the MSBA Board of Directors to invite a District into the Eligibility Period is based on a review of the District’s Statement of Interest ("SOI") and staff due diligence and recommendation. The vote initiates a 270-day period for the District to complete certain preliminary requirements that include: 1) a certification of the District’s understanding of the grant program rules by executing an Initial Compliance Certification; 2) forming a School Building Committee and submitting the membership to the MSBA for acceptance; 3) completing an Educational Profile Questionnaire to further inform the MSBA’s understanding of the District’s current and proposed educational facilities, teaching methodology, grade configurations and program offerings; 4) a summary of the District’s existing maintenance practices; 5) certification of a design enrollment for the proposed project agreed upon with the MSBA (may not be applicable for Repair Assessments depending on the proposed scope of work); 6) confirmation of community authorization and funding to proceed (see MSBA Vote Requirements); and, 7) execution of the MSBA’s standard Feasibility Study Agreement, which establishes a process for the District to be reimbursed for eligible expenses.

Districts that successfully complete the preliminary requirements to the satisfaction of the MSBA within the 270-day Eligibility Period are eligible to receive an invitation from the MSBA Board of Directors to the Feasibility Study phase. This phase involves the District utilizing MSBA-specific procurement processes and standard Request for Services ("RFS") templates and contracts to procure a team of professionals to work with the District as a proposed project advances through the MSBA grant process as defined in Module 2.