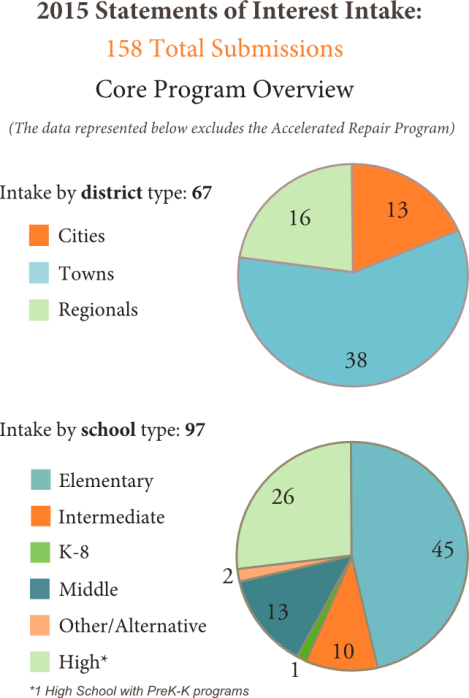 MSBA staff has reviewed the submitted SOIs and worked to validate the issues identified by districts in their SOI submissions.  During that process, the MSBA obtained additional or clarifying information from districts as needed.  After the MSBA reviewed the entire cohort of SOIs that had been received, it determined the appropriate level of due diligence that will be required for each SOI and notified districts of next steps accordingly. For more information, view the 2015 Statement of Interest Process Overview.

If the MSBA invites a district into the Eligibility Period, which requires a vote of the MSBA Board of Directors, the district and the MSBA work collaboratively to determine potential solutions to the issues identified in the SOI.  The MSBA works to find solutions that are educationally-sound, fiscally-appropriate, and that fit within the MSBA’s capital funding pipeline.

The MSBA’s grant program is a non-entitlement, competitive program, and grants are distributed by the MSBA Board of Directors based on need and urgency, as expressed by the district and validated by the MSBA.  Submitting an SOI is not an invitation into the MSBA's Capital Pipeline; it is the first step in the MSBA's program.  Moving forward in the MSBA's process requires further collaboration between the district and the MSBA.

If you have any questions about the SOI process, please contact Director of Program Management, Diane Sullivan.  Diane can also be reached via telephone at 617-720-4466.

To view a list of SOIs submitted to the MSBA by district in 2015, please click here: 2015 SOIs